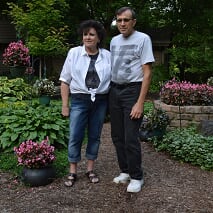 I received a B.S. in agronomy and an M.S. in agricultural economics from UW, plus an M.S. in economics from UWM.
I taught economics at Milwaukee Area Technical College for 29 years, retiring in 1999.  Simultaneously, I operated a part-time landscape contracting firm and, for 15 years, a nursery.

I self-published five editions of a college economics text under the Glengarry Publishing imprint from 1989 until 2007.  It was used at 135 colleges and universities, including one in Moscow, Russia.

Dorothy and I follow ten or so cover rock bands (music of the 80s until today).  In summer, we see them several times a week at various festivals and the State Fair.  In the winter, we see them at various bars.

We also like to travel, especially liking the West: Mt. Rainier National Park, the Grand Tetons, and the Sawtooth Mountains of Idaho being our favorites.  I take two foreign trips a year, usually alone (Dorothy does not like my “adventure” trips).

My passion is landscape gardening.  Our one-acre lot is intensely developed with various gardens.  In 2005, I began using mosses, as I have a small Japanese-style garden (mosses are often used in gardens in Japan).  I have a garden tour every summer.  It is a full-time activity, but I never tire of it.

I am a serious amateur photographer, which is useful in my travels and gardening.  When I get old in 30 years or so, I will spend my time viewing my thousands of photos.