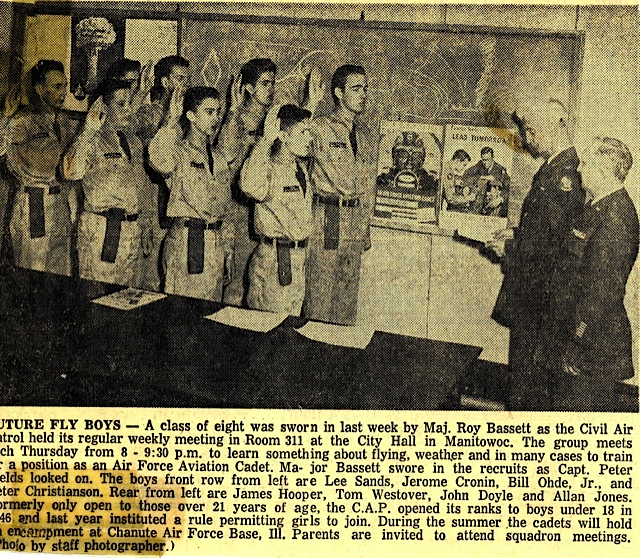 1958 . . .
The images above are of Bill Ohde and best friends Tom Westover and Peter Christensen.
The Civil Air Patrol was a big part of all of their late 50's experiences.  CAP was a dominant factor in those days . . . bonding as lifelong friends came along in a very natural way.

A Rally Call By Sharon

At 70, Bill was battling COPD.  Sharon (Heise, Ohde) Magnusson, along with the help of their three sons, cared for Bill on a daily basis.  In November 2012 Sharon called Pete Christensen to notify him of Bill's declining health.

By early 2013, Pete had already been visiting Bill on a regular basis.  Pete and Sharon decided to contact the old "Coachmen Car Club" Members, asking for help.

It was hard finding the names, telephone numbers etc., but Pete and Sharon persevered. They were able to contact John Torrison (Club President), Dick Neuses. John Harvey, and Tom Westover.  It was this group that came to help Bill.

A Music System for Bill 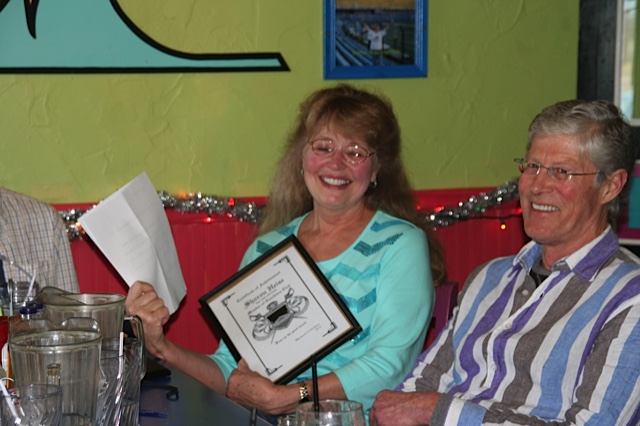 Awarding this membership to Sharon was a Hoot!!
Sharon was completely surprised.
Can you tell??

In an effort to stay in close contact with Bill, we created a program called "Listen with Bill" in which an electronic newsletter, with "Oldies" imbedded, would be published weekly.  Each receiving member would click on an Oldies song and be directed to Youtube to listen to it. The songs were carefully picked to insure that Bill had them on his iPod.  Since Bill didn't have internet access, Sharon would print the newsletter each week and listen to the songs with Bill.  In this way, we all listened with Bill.  We hoped our weekly contact would lift Bill's spirits.

A Video for Bill

Since we could not all visit Bill, Tom Westover suggested the creation of a video allowing each of us to speak directly to Bill.

The technology was challenging from the construction of the video to the recording by members.  Those of us who were able,  completed a video and sent the material to Todd Westover (Tom's son).  Todd stiched the individual videos together and created a final video that was presented to Bill by Sharon.
Here is an email from Todd Westover as he releases the link to Bill's Video.

Hello friends of Bill Ohde,
A few weeks ago my dad asked me if I knew of anybody who could put together a video for his friend Bill. He would get some of their old buddies to send clips of themselves saying hello. We could find photos of the cars they had, maybe put it to music. I said sure, I could help and started putting this together. It turned into a real labor of love. And I'm finally done. I hope you like it.

All the best,
Todd Westover

The "LISTEN WITH BILL" releases continued each week
until he passed away.